EIS is one of the top security providers to a varied portfolio of businesses and organizations both Nigeria and in the UK. We offer security solutions to Individuals, Companies, Industries, Organizations and Government bodies seeking to protect their environment and businesses.

Executive Intelligence Securities Ltd. was founded on the 30th of September 2010 by Mr. Ezenwa C. Anazodo in England and Wales with Registration Number 07393243, and registered in Nigeria CAC No. RC1487044

Our security installations and maintenance are carried out by well-trained industry professionals to the highest standards. We use the latest software for accuracy and cost effective implementation for our projects. We also use highest quality third party devices to carry out some of our services. We have been providing best in class services to our clients since formation, all our customers are currently sourced through referrals.

Complete And Effective Protection For Your Home And Office

EIS operates nationwide installation and maintenance in Nigeria. Find below the best way to get your equipment installed faster.

What Installation Do You Need?

Knowing the exact product you need, we can help you do the rest

Our experts engineers will locate you for installations and system configurations

Departure of the Our Experts

All new installations or maintenance has at most 24hrs response time

our support team are always available to provide immediate solution

Innovative Electronic Protection Of Your Office And Home Control Online

The security industry is an integral part of our world, especially in the current global climate where crime and terrorism has been reaching an all-time high.

The Federal Government spends a fortune annually on security; the budget for security is always on the increase every financial year because people that perpetuate crimes and terror are becoming more sophisticated in their methods.

This doesn’t just apply to organized terrorist associations, but also to the common criminal who has access to technology via their smartphone that 10 years ago would only have been available to Police and Military special forces!

The security industry is a huge industry that accommodates experts who are specialized in different fields, and innovations in both practice and technology are always occurring. At EIS we understand these industry inside out and that is reason you should engage us for perfect installations.

The term access control refers to the practice of restricting entrance to a property, a building, or a room to authorized persons.

Physical access control can be achieved by a human (a guard, bouncer, or receptionist), through mechanical means such as locks and keys, or through technological means such as access control systems like the mantrap. Within these environments, physical key management may also be employed as a means of further managing and monitoring access to mechanically keyed areas or access to certain small assets. When a door is locked, only someone with a key can enter through the door, depending on how the lock is configured.

Mechanical locks and keys do not allow restriction of the key holder to specific times or dates. Mechanical locks and keys do not provide records of the key used on any specific door, and the keys can be easily copied or transferred to an unauthorized person. When a mechanical key is lost or the key holder is no longer authorized to use the protected area, the locks must be re-keyed.

The above description illustrates a single factor transaction. Credentials can be passed around, thus subverting the access control list. For example, Alice has access rights to the server room, but Bob does not. Alice either gives Bob her credential, or Bob takes it; he now has access to the server room. To prevent this, two-factor authentication can be used. In a two-factor transaction, the presented credential and a second factor are needed for access to be granted; another factor can be a PIN, a second credential, operator intervention, or a biometric input.

There are three types (factors) of authenticating information:

Something the user knows, e.g. a password, pass-phrase or PIN

Something the user has, such as smart card or a key fob

Something the user is, such as fingerprint, verified by biometric measurement

Passwords are a common means of verifying a user's identity before access is given to information systems. In addition, a fourth factor of authentication is now recognized: someone you know, whereby another person who knows you can provide a human element of authentication in situations where systems have been set up to allow for such scenarios.

For example, a user may have their password, but have forgotten their smart card. In such a scenario, if the user is known to designated cohorts, the cohorts may provide their smart card and password, in combination with the extant factor of the user in question, and thus provide two factors for the user with the missing credential, giving three factors overall to allow access

Electronic access control uses computers to solve the limitations of mechanical locks and keys. A wide range of credentials can be used to replace mechanical keys. The electronic access control system grants access based on the credential presented. When access is granted, the door is unlocked for a predetermined time and the transaction is recorded. When access is refused, the door remains locked and the attempted access is recorded.

The system will also monitor the door and alarm if the door is forced open or held open too long after being unlocked. The same method can also be applied to gates, shutters, barriers and turnstiles.

Infrared Thermal Imaging Technology To Quickly Capture Temperature Data, To Measure Temperature For People Passing In Non-Contact Way , And To Prompt Alarm The Abnormal Temperature Through Acousto-Optic Alarm, So As To Effectively Prevent Large-Scale Disease Infection. 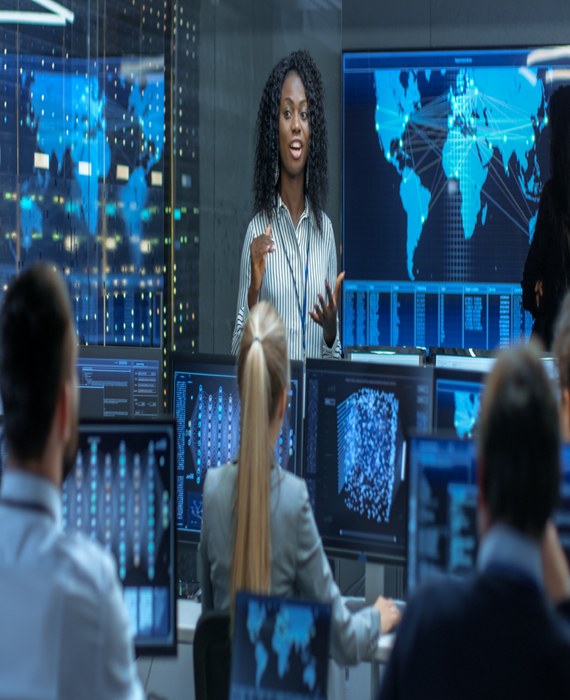 Our Approach To Security

What Client’s Say About Us

We have been providing best in class services to our clients since formation, all our customers are currently sourced through referrals, here are what few has got to say.